Hello All, cheers for your support and donations!
Were back home and the dust has settled, were just about ready to do more detailed write ups for the day rides.
(I am gutted its over and searching for a new mission, but we will get to that later...)

Day 0
Train from Preston to Penzance, as soon as we arrived at Preston station people started giving us donations! Straight away, the signs on the back of the bikes turned out to be a really good idea. The trains went like clockwork even with the bikes, we had booked the bike spaces of which there are very few per train. Landed in Penzance and it absolutely hammered it down with rain before we even got out of the train station. Rode 8 miles over hills into wind to Lands End Youth hostel, noticed the change in countryside straight away. The ride still didnt feel real at this point. Lands End YH is one of the best we stayed in, good introduction to hostelling anyway. We met up with fellow riders who where doing same or similar ride to us. (Ian and Clive)
Whilst checking the route for tomoro we found we were catching a car ferry, king harrys, we think we knew about this just forgot! 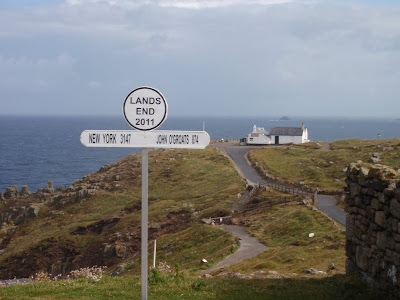 Day1 67miles
Set off early to ride to start at Lands End, about 6 miles away, very excited. Arrived at Lands End and it was closed cos we were too early, theres 'tourist tat' there lots of it. We stood there for about an hour talking to various groups of cyclists who came through before photo man eventually turned up. Apparently its private land and you can only take a picture of his sign from outside the fence... 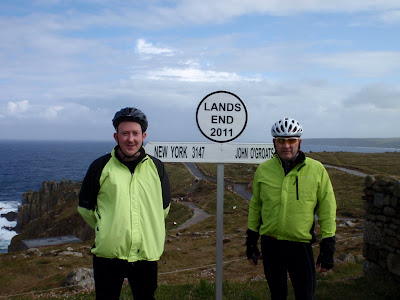 Picture sorted, of us and the bikes and the date and stuff, £12 rinsed out of us. A quick shout of Have It! and then we were off. Theres a start /finish line painted on the ground, thats when the ride became very real. We didnt even get out of the car park before we were soaked through! 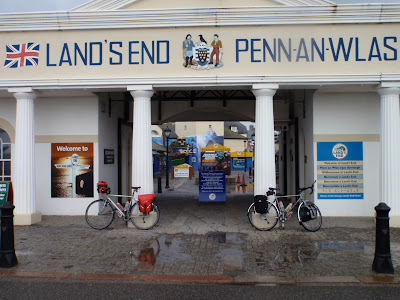 This day and day 2 are supposed to be amongst the most difficult of the trip, this is true, very hilly today, good job we had fresh legs at this point! I snapped my chain, putting too much force on it whilst changing gear at wrong time on steep hill, dope! We carry speedlinks with us so it wasnt too bad, steve left his chain tool on the ground and we rode off, good job we didnt get far before realising. I also broke my phone cos my waterproof jacket isnt waterproof and got sunburnt today, good start!

Fianlly arrived at Golant YH near Fowey and found it was just us and a coach full of schoolkids in there, tea and breakfast the following day were very loud! Golant hostel showers were crap, had to run round to get wet!
Posted by Dave at 12:27